One of these times, I won’t get nervous about the good, old MRI.  Apparently this time isn’t it.  Next Monday I get to have another, just to check for any silent lesions that may have occurred.  Since I’m on a precarious edge, here, of having MS, but not taking any disease modifying drugs, this is the path:  MRI, and then review worst-case scenarios with my neurologist every six months.

T minus one week.

I’ve got to clean up this house and get rid of clothes and toys and pull all the dandelions and then sign up for another triathlon.  And open water swim lessons. And buy a wet suit. And maybe a hitch and bike rack.

Because I’ve been doing new/scary things for a couple weeks now.  First bikini wax (actually, NBD), annual physical, trying on a wet suit (with the dressing room door open, in stages, only zipped for a minute…but I DID it), going back to that damn pool, getting water in my left ear and still swimming.  PTA meeting—the WHOLE thing.

What happens when the Door County triathlon is over?  Sloth.  Feeding frenzy.

What happens when both kids go to school full-time in the fall?  The birth of a black hole.

I know.  As a culture we’re terrible at sitting still.  Well, I’m a child of that culture, through and through.  And yoga says when the stillness is intolerable, perhaps you should sit the bleep down and breathe.  I’ve tried that.  It makes me cry. I kept trying it.  Now, I’m picking swim/bike/run/lift instead.  I make myself take rest days, because I know all too well how injury prone I am and how I tend to push to breaking.  I thought for years that all I wanted was a chance to sit down on the sofa for a half hour with NOTHING in front of me…..and I finally have it for a few hours a week….and I HATE IT.  It turns out I not only DON’T want that, I CAN’T handle it.  YOU do it.  You sit and think about MS and dairy and what now and no, you don’t want to be co-president of the PTA even though you know you should, but you probably can’t if the meetings start at 7 pm and this fatigue that never goes away doesn’t have anything to do with training.  YOU think about limits and do you have any now and are you preserving your energy or just hiding.  YOU think about the distance that grows between you and your precious eight-year-old by the day.  YOU think about the sugar you all eat and the garden you don’t have the heart to plant this year.  YOU think about how you can’t sit still to read.  Even Terry Pratchett! YOU check to see if the valium is waiting for you.

Sure.  There are ways to fill those hours.  I KNOW.  I have the lists to prove that.  But what happens (especially now that all my shows have killed off my beloved characters) is this angry restlessness.  The kids come home and I’m short-tempered and mean. Everyone suffers.

There’s a #WhyITri thread out in the world, and it makes me a little sad to know that why I am training for a triathlon is that I can’t handle sitting still, that I was going to quit, but my neurologist said to keep doing it, and in fact, hey, let’s not meet again til after my race.  And that the MRI is next week and the valium doesn’t really do it, so I’m going out for a swim and a run today and a long bike tomorrow, and I’ll keep repeating that until it works.

See you out there.

First up, the Secret Sun Garden: 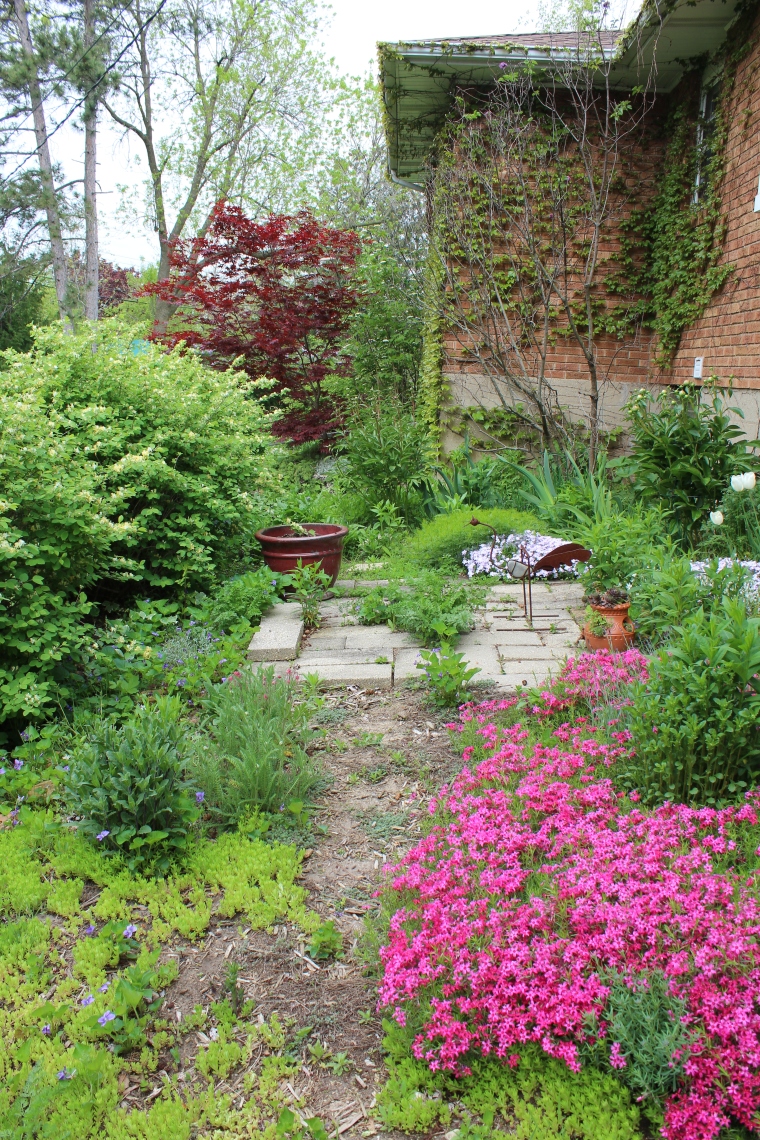 The lilac in the corner is one I planted our first spring in the house, 12 years ago.  IT has thrived and brought so much joy, but this year just didn’t come back. I cut down what I could in the hopes I could revive it….but this might be the last bouquet:

And this is what the Secret Garden looks like now:

Not as bare as I thought it would be, for the ivy that has covered the wall.

I got something really special this Mother’s Day.  My mom gave me a part of a lilac that has grown at all of my homes.  It was part of the hedge between us and our neighbors in Milwaukee, where I was born, and it was the first lilac at our home in Hartland, where we moved when I was eight.  Now, it has a new home in my own garden.  I didn’t think I was sentimental, but meet my newest, oldest plant (let’s call it Ingrid):

The kids decided the front planter shouldn’t be a dirt/rock pile for digging in this year, but a rainbow garden instead:

Although the cat thinks this still makes suitable sunbathing spots. 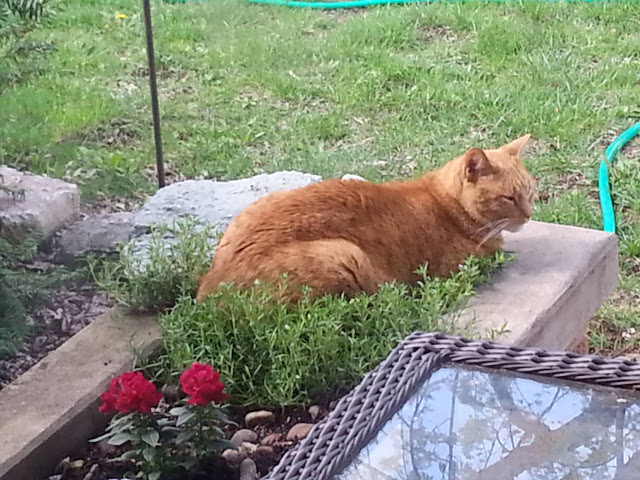 The vegetable garden, meanwhile, is suffering from neglect.  Not that the rhubarb minds:

I’ve just been ignoring it.  My youngest gardener got excited back in March when we had an early, false, spring and we put some seeds in,

but this is what the beds look like today:

Those are mostly “volunteers” in the beds.  Catnip, calendula, tomato, pumpkin, sunflower, parsley, chives, sage, mint, and dill have all thoughtfully re-seeded themselves.  The kids have plans for a fairy garden and they want to see which gets bigger, Sunzilla or Titan sunflowers.  They also want to harvest potatoes and onions again this year, have carrots, kohlrabi, and nasturtiums  to eat on the run but like me, they just don’t feel up to turning the beds over and planting.

This is the first year I haven’t had the vegetable beds planned out.  I usually have it mapped by February.  I guess we don’t need to run a one-family CSA every year.  Maybe what we already have and do is enough this year.